The patterns of a psychopathic elite hell bent on conning and scaring people into accepting their New World Order [for our safety, of course], are becoming ever more predictable. Much like a one-trick-pony, once you know what the trick/pattern is, you pretty much know what to expect the next time around.  Take for example, today’s article from judicialwatch.org and compare it with the following:

From the last five minutes of the Ohio Exopolitics show James Horak and I did on July 12th (see next post):

“What i’m concerned about the border is…we recently had Zionist Feinstein come out and say, ooh, there’s another terrorist attack going to happen and she knows [because she’s seen the plans], and i’m sure she is because she probably helped write the plan, and then we had Dick Cheney and some other social engineers come out and say, oh it’s coming. And poof–we have a border crisis.

And the next thing you know, ooh, members of Al Qaeda are sneaking through the border–I think they said they caught seven of them. So this is opening the gateway, psychologically they are seeding the population to accept terrorism on our own soil.”  –Crystal Clark

Imminent Terrorist Attack Warning By Feds on US Border 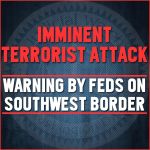 “Islamic terrorist groups are operating in the Mexican border city of Ciudad Juarez and planning to attack the United States with car bombs or other vehicle born improvised explosive devices (VBIED). High-level federal law enforcement, intelligence and other sources have confirmed to Judicial Watch that a warning bulletin for an imminent terrorist attack on the border has been issued.  Agents across a number of Homeland Security, Justice and Defense agencies have all been placed on alert and instructed to aggressively work all possible leads and sources concerning this imminent terrorist threat.”
* * * * *
See how easy that is? The sane and moral want peace, yet there can be no peace without the truth–no matter what it is. This, above all, must come first. While the NWO nuts appear to use the same playbook over and over, the rest of us aren’t even on the same page. EXPOSE THEM to your fellow man for the liars, cheats and thieves that they are. Then we can affect great change, work for the same goals, and more importantly, we can do it together.

One thought on “PREDICTABLE PATTERNS OF THE NWO”