The following article was written for the December 19, 2012 Newsletter published by THE SECRET OF LIGHT; a site centered on teaching and sharing the amazing work of Walter and Lao Russell in regards to Natural Law and the incredible awareness—both scientifically and spiritually—better understanding of creational design can engender. Matt Presti and Robert Otey have done an excellent job carefully explaining Walter Russell’s work in its pure form, and their collective work clearly embodies the constant joy they derive from spreading the message. My sincere appreciation for being invited to contribute to their latest Newsletter—the article is below.

Even the shallowest attempts at honest historical reflection—both our individual and collective history—will often reveal there were very specific and pivotal moments wherein better choices or alternatives were available. These defining moments and the crucial timing of their appearance are generally viewed from the perspective of hindsight, and the hard-earned lessons that come with it. Not knowing what we had until it was gone, by experiencing a difficult period of time without it, is often how we brand those once elusive moments in our personal lives.

In a more collective sense, these very special opportunities for global course correction were brought to us by brave and gifted individuals from all walks of life. Further, their timing and appearance into our collective reality should be duly noted, not just in terms of what they offered, but also the need that offering would have filled. Each instance and appearance marked a pivotal moment in time that could have quickly and dramatically forever changed the course of our future. The most celebrated and well-known list of these personalities includes names like Gandhi, Malcolm X, John Lennon, Martin Luther King, and perhaps even Tesla. Short as the list may seem however, there were certainly many others of note, and Walter Russell was definitely one of the others.

Tesla and Walter Russell were active in our collective past during the same time period, and in fact they knew each other. Personally, I find it difficult to tell whose genius was more impressive between the two, but then we don’t have much of Tesla’s work publicly available to us in that regard. We do know however, as it was and has been for so many gifted minds of this caliber, that their genius was first absorbed (funded, co-opted and publicly suppressed) by people who had no intention of doing anything other than building bigger weapons and bank accounts with it. This type of greed and technopathy, and the secrecy it engenders, still seek to impede cultural progress and plague us today. Even so, while the bulk of Tesla’s work and understandings may have been confiscated and hidden from the public, this is not the case with Walter Russell’s work. Even the home study course created by Walter and his wife Lao in the 1950’s can still be found in its unadulterated form.

Reading through it one will immediately discover that they had many of the same concerns then, that we have now, especially where the misapplication of knowledge breeds technologies that become more wholly destructive and anti-life with every new natural law they violate.

This was very succinctly expressed in Lesson Number 34 of the Home Study Course under the section titled THE RISE AND FALL OF MAN:

“These four lessons are especially devoted to making you fully comprehend the cause of the periodic rise and fall of man, as an individual, a nation, and whole civilization. They are also devoted to giving you the knowledge needed for rising to great heights with such stability you will not fall. We have never yet known the law of Nature which governs our rising and falling. We have not been able to command or obey that law because we have not known it. We have suffered the pains, aches, disasters, and tragedies of disobedience to Nature’s laws because of our ignorance of it.”

Even more impressive, beyond their understanding that where there is design there is a designer, was their intimate realization that although the creation may be separate from the creator to some degree (the way a painting is separate from the painter), the best way to understand the later, is to understand the former. In this sense, they are no longer entirely separate from each other, but rather one is the reflection of the other; what has been created is a reflection of the thoughts and desires of its creator.

This is very much true of the creational design matrix we call Nature, which certainly extends well beyond our own planetary front door. In other words, the same principles apply at every scale of creation, and this realization is something Walter and Lao Russell worked very hard to communicate.

One of the more beautiful principles they expressed regarding the creational design matrix, is that everything is given for the purpose of re-giving. We see the reality of this simple principle repeatedly played out in nature all around us—especially throughout the changing seasons. There is a period of activity where new life is in full bloom (summer), and a period of rest (winter) where what was given to the tree and its blooms is returned to the earth so that it may be taken up again later. There are transitory phases in between (spring and fall), regulated by what Russell referred to as “rhythmic balanced interchange”. 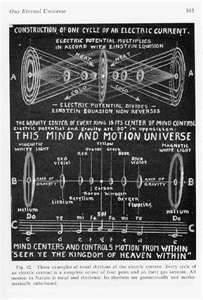 Rhythmic breathing (and interchange) patterns of the creational design matrix are included in our own breathing patterns as well. One moment our lungs may be completely full, actively delivering the oxygen to our blood stream (summer) and making an equal exchange with carbon, and once the carbon has been completely expelled and our lungs are empty (winter), the process is repeated. Further, the carbon we exhale we give to the tree so that it may breathe—even the carbon our lungs are given to exhale is re-given to something else. We also see this same form of rhythmic balanced interchange, in terms of alternating action and rest periods, in our days and nights; in our own action (awake) and rest (sleep) periods. Also, even our days and nights have transition periods: dusk (exhale) and dawn (inhale).

Walter Russell also beautifully connected this great, rhythmic and creational breathing in-and-out, to our misconceptions of life and death. Life is the giving phase, and death is the re-giving phase. And certainly, that these phases have phases of their own is represented by the age-old question: What walks on two legs in the morning, and three legs in the evening? The first half of our lives (when we crawl on two legs) is full of growth and regeneration. The second half of our lives begins a more degenerative process wherein we may find ourselves using a walking cane for support (three legs).

This can also be viewed as integration and dis-integration, for the purpose of re-integration. Life and death are two sides of the whole life cycle.  Walter Russell further applied this to a deeper understanding of concentration and de-centration, not just in terms how an idea (non-physical) becomes compressed to manifest in ways our senses refer to as physical, but also how that applies to reincarnation.

Regarding reincarnation, Russell likened the incarnation and re-incarnation process to photography. He explained that as long as the original negative exists, destroying all of the positive copies made from the original wouldn’t really upset a person. With the negative, another positive copy can be made “by projecting sunlight through the patterned negative and the reverse of it would provide a positive pattern.” In other words, positive photo copies of the negative were simply re-incarnations of the original pattern. In regards to what we think of as death, Russell further explained:

“The negative has absorbed the positive, but white light will again be projected through that negative and it will “print” a new one. Scientists have ever wondered how it is that matter seems to emerge from space and can be swallowed again by space…bodies eternally repeat themselves to manifest life.”

Walter Russell believed that the pattern or negative of a body (bodies being everything from trees to suns) was the thought-body or thought-record of the material body, and that this was Nature’s system of record keeping—the way Nature records every thought pattern and action of all Creation. In other words, the pattern or negative of a body is stored so that it can one day reappear.

Of course this is an oversimplified version of his tremendously expansive teachings in this regard, but I thought this particular example would be fun to use because examples of it are easy to find—especially in what we refer to as doppelgangers. This phenomenon of *repeating bodies* is becoming more and more well known. More examples can be found here and here.

Giving the timing of the Newsletter for which this article was written, there is one last observation I would like to share. Walter Russell embodied a type of genius that implies he had Unified Consciousness. This goes beyond just understanding the creational necessity of sexed pairs of opposites and their rhythmic balanced interchange one with the other. Walter Russell clearly stated that the body mind is merely a sensing and recording machine—it is NOT the Soul mind or Universal mind. The soul mind is centered in the heart. The brain is used for sensing, but the soul mind has a knowing that goes beyond the sensing mind. Unified Consciousness is achieved when both are working together; Walter Russell was a functioning example of this union.

The way split consciousness has been encouraged and exploited for thousands of years on this planet, which includes everything from withholding proper scientific knowledge (dumbing down), chemical additives to vaccine, food and water supplies, repressing the value of feminine energies and promoting socially debasing relationship patterns, has been opportunized to create a global “master—slave” construct. This imbalance in equity and equality is something Walter Russell also had a great deal to say about, as it is also a violation of Natural law which requires balanced interchange—giving for the purpose of re-giving—not hoarding for self and power over others. Further, using the same analogy of the creation being a reflection of the mind of its creator, this can certainly be reversed: the destruction being a reflection of the mind of the destructor, aka, our shadowy global “handlers”. Their behavior clearly indicates that they themselves are not yet capable of understanding the inevitable outcome of their incredibly imbalanced behavior, for all involved. That is to say, they too are participating in their own demise out of ignorance.

That said, as discussed in my latest article (The Winners Write Reality) and the associated radio show, I do believe that December 21st through December 23rd of this year, a window into the infinite (Universal mind) is being opened for us. For these three days it is entirely possible that everyone on this planet—even them—will experience Unified Consciousness long enough to achieve a kind of clarity and knowing that will be as life-changing for us, as Walter Russell’s Divine Illumination was for him. Having a pen and paper available during that time will allow you to record your thoughts and inspirations, the same way Walter Russell recorded what he learned during his own similar experience. This is a very special time in our history and if harnessed, can provide potentials for change never before shared by so many people at the same time.

Blessings in your continued journey wherever it may take you,